I've been busy colouring this weekend so just the 1 quick card! I did make my own designer brads though and it's my first make using a new kit from a company that I've never used before. Lelli-Bot crafts was on Create & Craft a few weeks ago and as I hadn't heard of them, I had to watch. They had a whole range of kits that are a little bit different. I ordered 2- this Fantasy Dragon one and Gothic Lace, which is monochrome with skulls and lace.

With the popularity of programmes like Game of Thrones, I thought this kit would be a good investment for some of the craft shows I'll hopefully be selling at during the summer! I haven't personally watched Game of Thrones but I have read the books. I tried to watch it but the 'wights' freaked me out too much in the first episode that I didn't watch any more. They weren't that creepy in my own head! 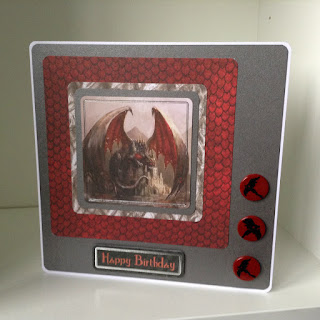 This card was super quick to make and all of the toppers and papers came from the Fantasy Dragon kit. I started with an 8x8 card blank, rounding the corners for a bit of extra detail. I then used a pearlescent grey paper for the first layer on the card, followed by layers of the patterned papers and the square topper. The message also came from the kit.

To complete the card, I added 3 large red brads to the bottom right hand side of the card. To tie them in to the theme of the card, I stamped and black embossed each one with a small dragon stamp from a Creative Expressions set that I've had forever. I used 2 different sized stamps across the 3 brads. They are not as detailed as I would like, but I'm still happy with them. 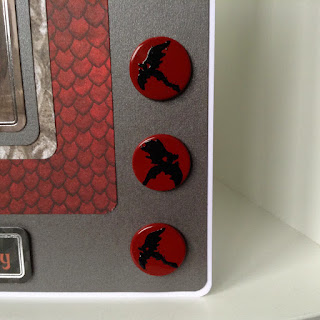 DoCrafts are always bringing out products that I love and their newest range 'Owl Folk' is no exception. Create & Craft had 2 kits last week that together comprised of the entire Owl Folk range. I did a bit of a price comparison and it seemed like a good deal so I got both sets. They arrived on Saturday so the long bank holiday weekend meant that I got to play with them today- I wish every weekend had 3 days! I'd get lots more crafting done- possibly! 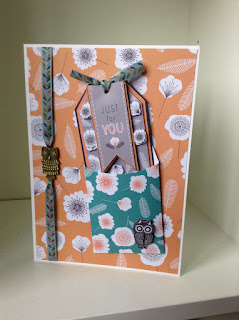 I started by layering up the decoupage tag and putting together the pocket, both from the Ultimate Die-Cut & Paper pack. I added a short piece of ribbon to the end of the tag so that it can be removed from the pocket if wished. I then chose a backing paper that incorporated the orange colour of the tag and pocket. Once I had chosen my backing paper, I felt that the tag didn't stand out enough so I mounted it onto some navy blue paper from the 6x6 paper pack. I threaded the owl charm onto a length of the same ribbon that I used on the tag and attached it to the spine of my backing paper, securing the ribbon on the back of the paper with double sided tape.

I then folded a sheet of A4 white card to make an A5 card blank and mounted all of my items onto it using tape.

Another busy weekend for me but a little bit of crafting squeezed in as usual! Tried to get a few cards done as I might not get any crafting done next weekend- the ladies football team I play for has our first ever match next Sunday so my usually calm crafty day will instead be a sweaty, active day! We have been promised a post-match team talk in the pub though, so I think I'll survive!

Anyway, here's one of my makes from this weekend... 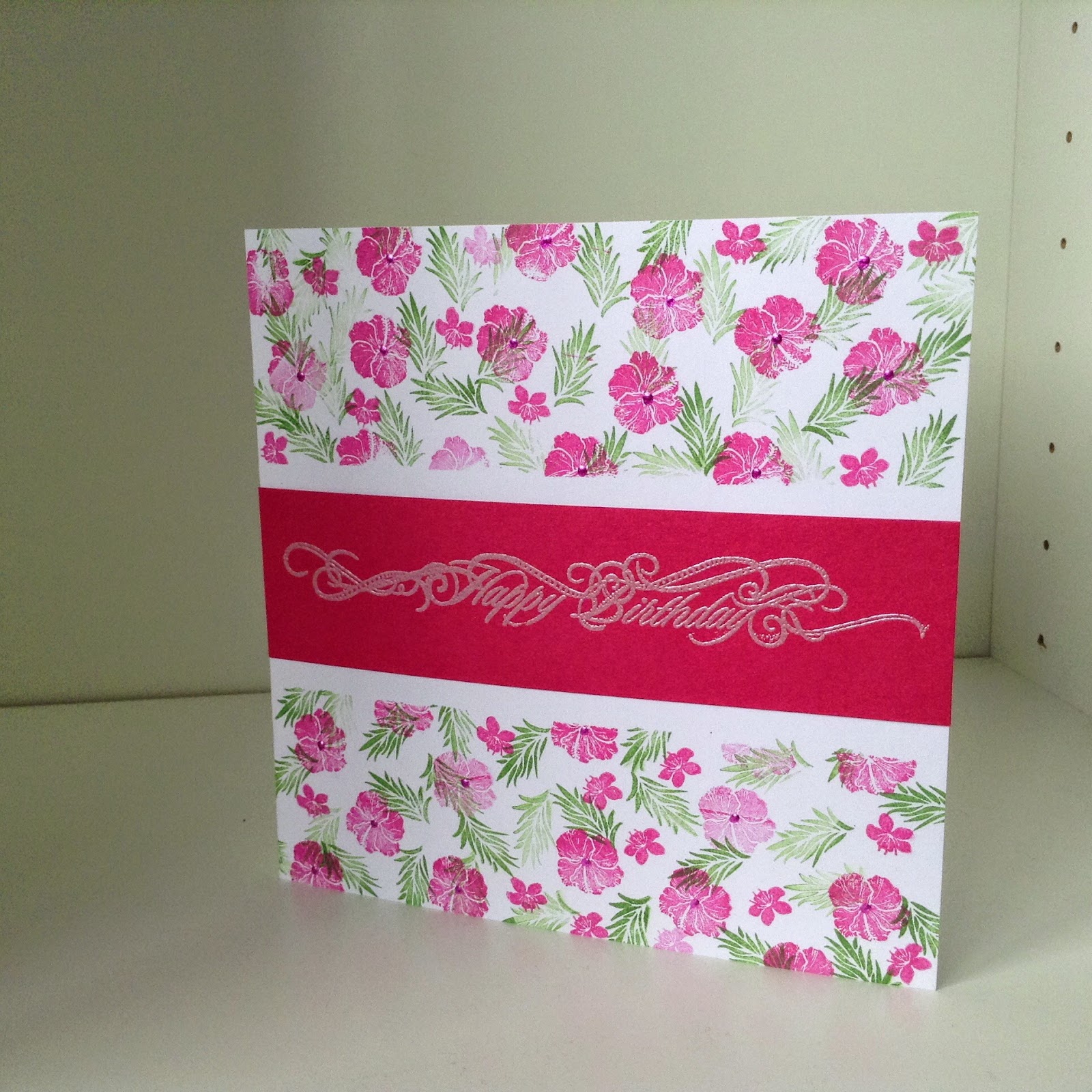 I am creating more simple, 1 layer, cards recently and this is another example of that style. I love CAS cards and I think this definitely fits into that type of crafting.

I started with a 6x6 white card blank, masking a panel across the middle with a piece of scrap paper. I then used 2 flowers and a leaf stamp that have been in my stash for years (they are very small purple rubber stamps, that I think were called SeeD's by Papermania/Anita's- they are similar to the sort of stamps now sold by Majestix- but not clear) and randomly stamped using just 1 pink and 1 green ink pad. I used 2nd generation stamping to achieve the different shades of colour.

I wanted to add a sentiment to the central panel of the card but was a bit too scared to stamp directly onto my cards base! Instead, I cut a piece of raspberry pink card to slightly smaller than the white strip and then stamped and embossed my message onto that instead. I finished the card by adding liquid pearls and stickles glitter glue into the centre of the flowers (doesn't show up very well on the picture unfortunately!).

It's been a really nice few days weather wise here so I've been inspired to make a summery card. 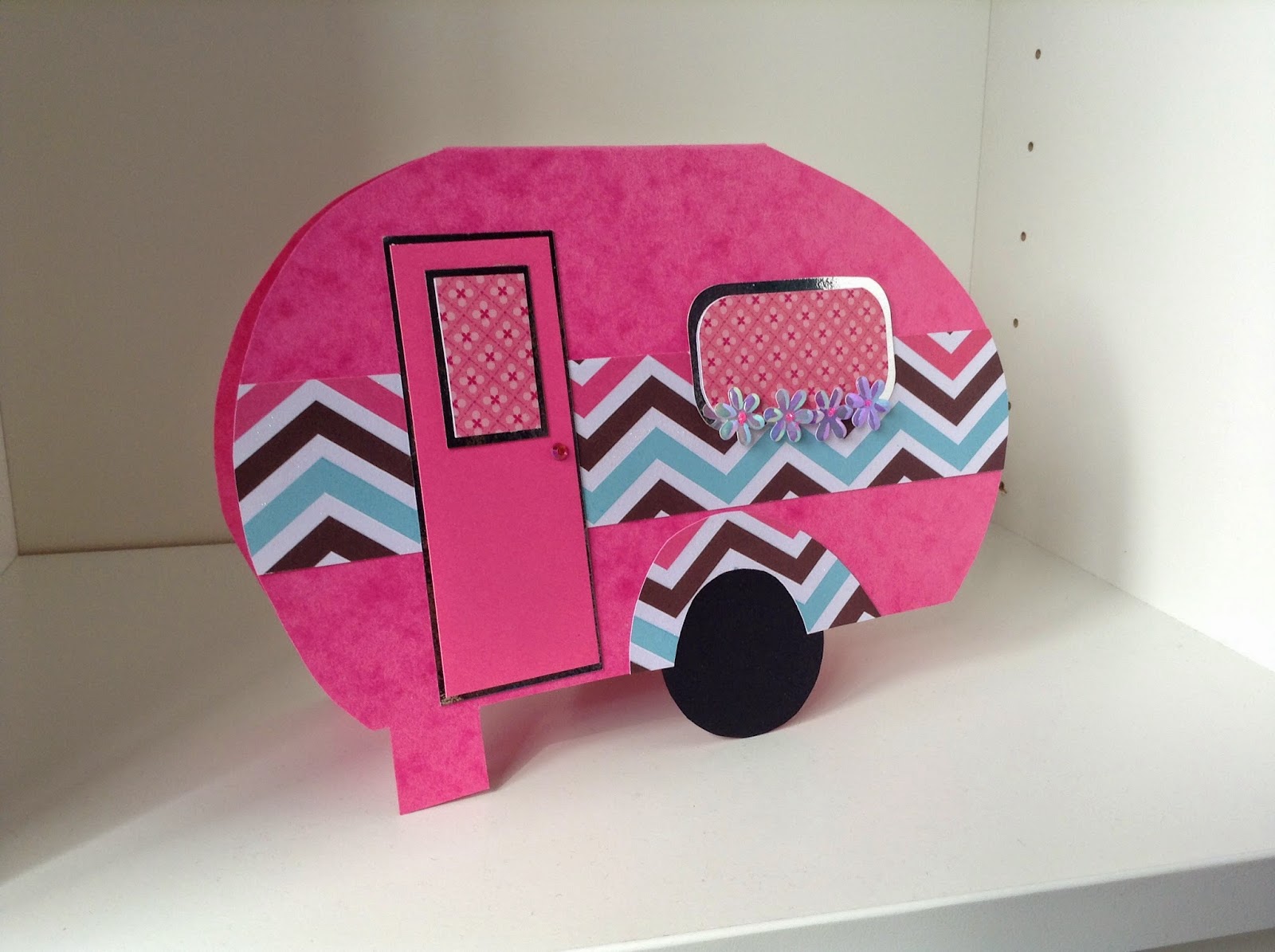 I made this caravan shaped card using a template printed from 'Garden Sheds' cd-rom. I printed the caravan image and then used it to cut out the shape onto a folded piece of A4 card. To make sure it stands up, I added the small square at the front of the caravan as a stopper. I then used various patterned papers, mirror card & flower embellishments to decorate the caravan and to create the shapes needed for the details.

Email ThisBlogThis!Share to TwitterShare to FacebookShare to Pinterest
Labels: Mirror Board, Shaped Card

When I went to the NEC at the end of March, I got some beautiful stamp sets from Hobby Art. I ended up with 6 different sets as I couldn't make a decision on just 3 (they were £10 each, 2 sets for £18 or 3 sets for £25- so they HAD to be bought in multiples of 3!). I did buy with a plan in mind as I am going to a local steam rally to sell some cards later in the year so I bought farming themed sets that I could use to make cards along those lines. I also got a set that features old aeroplanes, one of which normally does a fly past at the event. I have used stamps from lots of different sets to make this card. 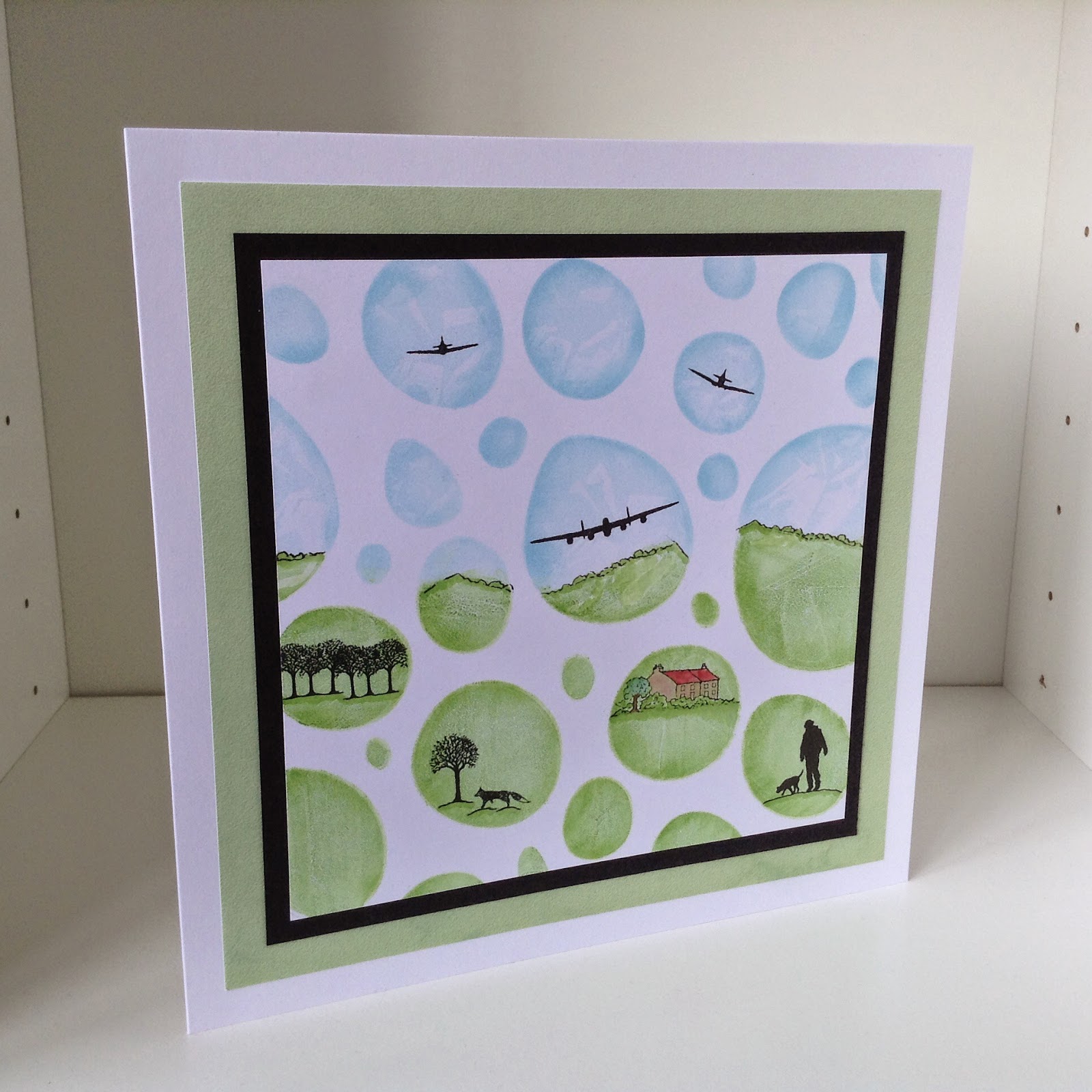 I started by creating the green and blue circle background of my card which I did using a Clarity stencil, Gelli Plate and Distress Inks (mowed lawn, tumbled glass). I placed the circle aperture Clarity stencil onto my Gelli Plate and used a brayer to roughly apply the green distress ink to the bottom half and the blue distress ink to the top. I tried to make it random rather than a straight line. I used a scrap of paper (screwed up) to remove some of the blue ink, hoping to create a cloud effect. I then removed the stencil and printed the ink onto my card. I was really pleased with how it had turned out- I luckily managed to create something that looked a bit like a hill which was good!

I then used the stencil again and the same colour of distress inks just to ink the edge of each circle aperture to create a little more definition as it was rather pale. It was then time to stamp. I was a bit scared about messing it up by getting the perspective wrong so didn't add too much stamping in case I messed it up!

I started by stamping the plane silhouettes (from Flypast stamp set) into 3 of the sky panels. I then used stamps from 'In the Country', 'Farmhouse Scene-it' & 'Old Barn' on the green 'hill' panels. All of the stamps were inked with Versafine black ink which shows the detail perfectly. I then used some more distress inks (leftovers on my blending mat) to colour up the house and define the hills a little more.

I simply mounted my artwork onto a black, then green, mat and attached it to an 8x8 card base. Took longer than some of my usual cards, but I really love it and I'm glad that I was brave enough to give it a go!

Last night, I was having a look around Pinterest (like you do) and found the most fabulous idea for using badges. You can find the original idea here.

I loved it because every time I go to a concert (which is usually at least 3-5 times a year), I tend to buy a t-shirt and a badge pack. This means that I have a stupid amount of badges! When having a clear out a few years ago I also found an original Take That badge from the early 1990's and some Rainbow badges (brilliant kids tv programme) from the late 1980's. I know that I'd never throw them away but it also seems a bit daft that they just sit on a shelf gathering dust. Today I've used an old canvas and some of my badge collection to create this fabulous artwork! 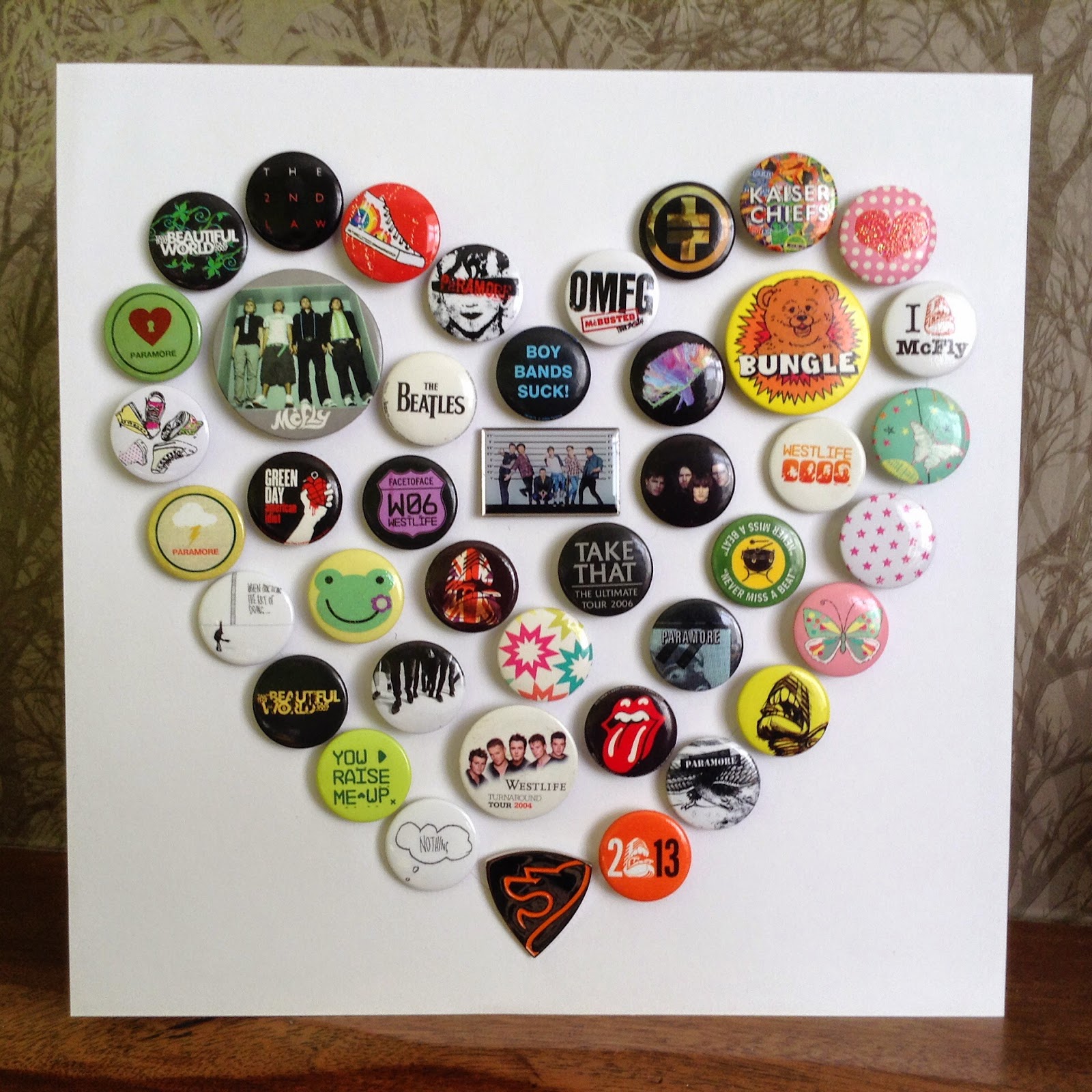 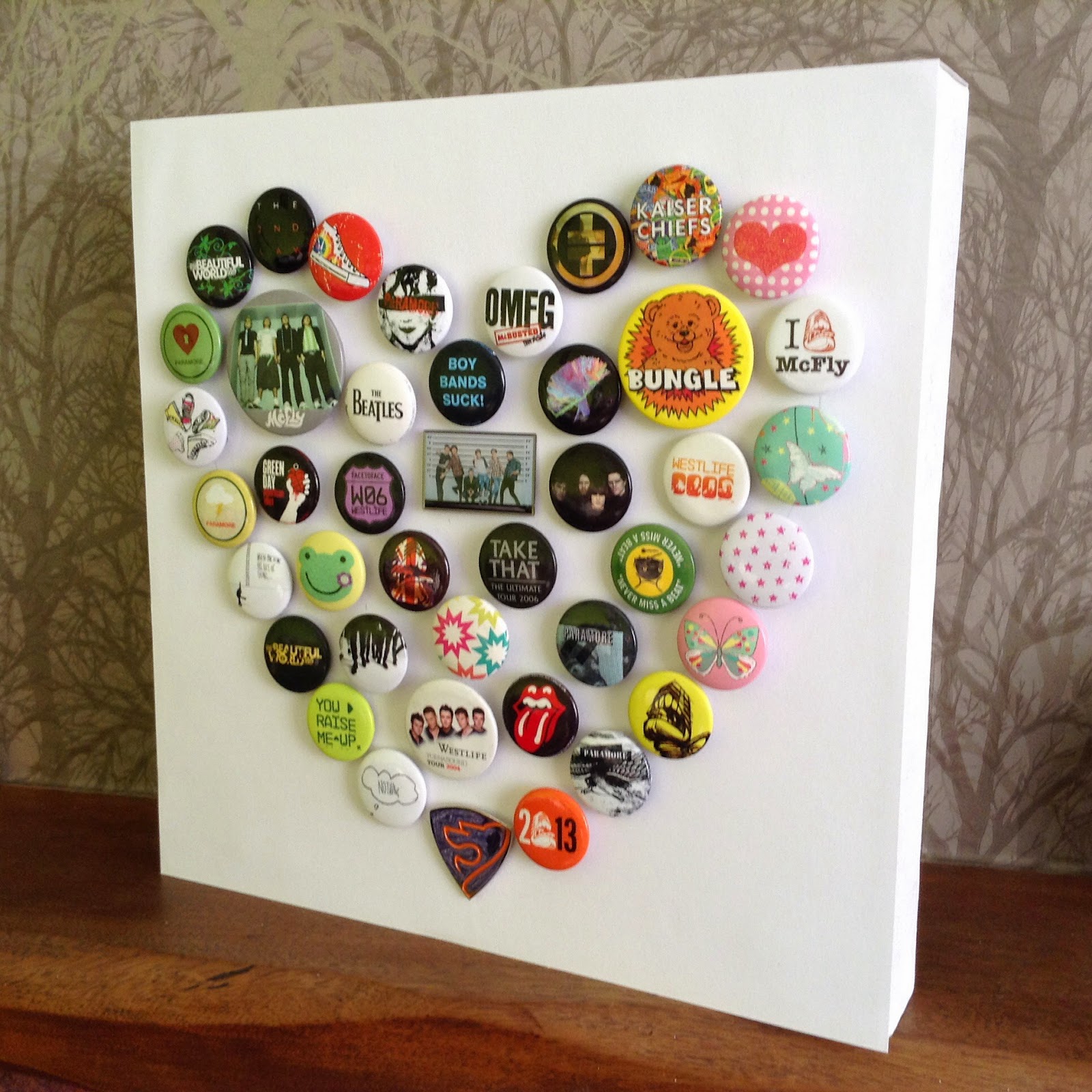 It took a while to make and I'm not convinced that I've stuck the badges securely enough but time will tell! I'll definitely be making another as I have lots more badges to use.

I started with an old, roughly 10" x 10", canvas. It was a bit dirty so I decided to cut a piece of white cardstock to create my design onto and then mount that onto the canvas. I used my Cricut to cut an 8" x 8" heart as a stencil and very lightly traced the shape onto the white card. I then laid out a selection of badges (trying to be as random as possible) onto the shape of the heart to make sure they would fit well. I then carefully removed each badge one at a time and stuck it to the card using a double (sometimes triple) layer of foam pads. Once all the badges were attached, I coated the canvas with a layer of pva glue and then stuck the card to it.

I love it because it uses 2 'old' things and I can now display my badges rather than them being hidden on a shelf!

Today has been a really miserable day weather wise- began to wonder if the living room windows would stand up to the wind and rain! Good excuse to stay in the house and craft anyway... 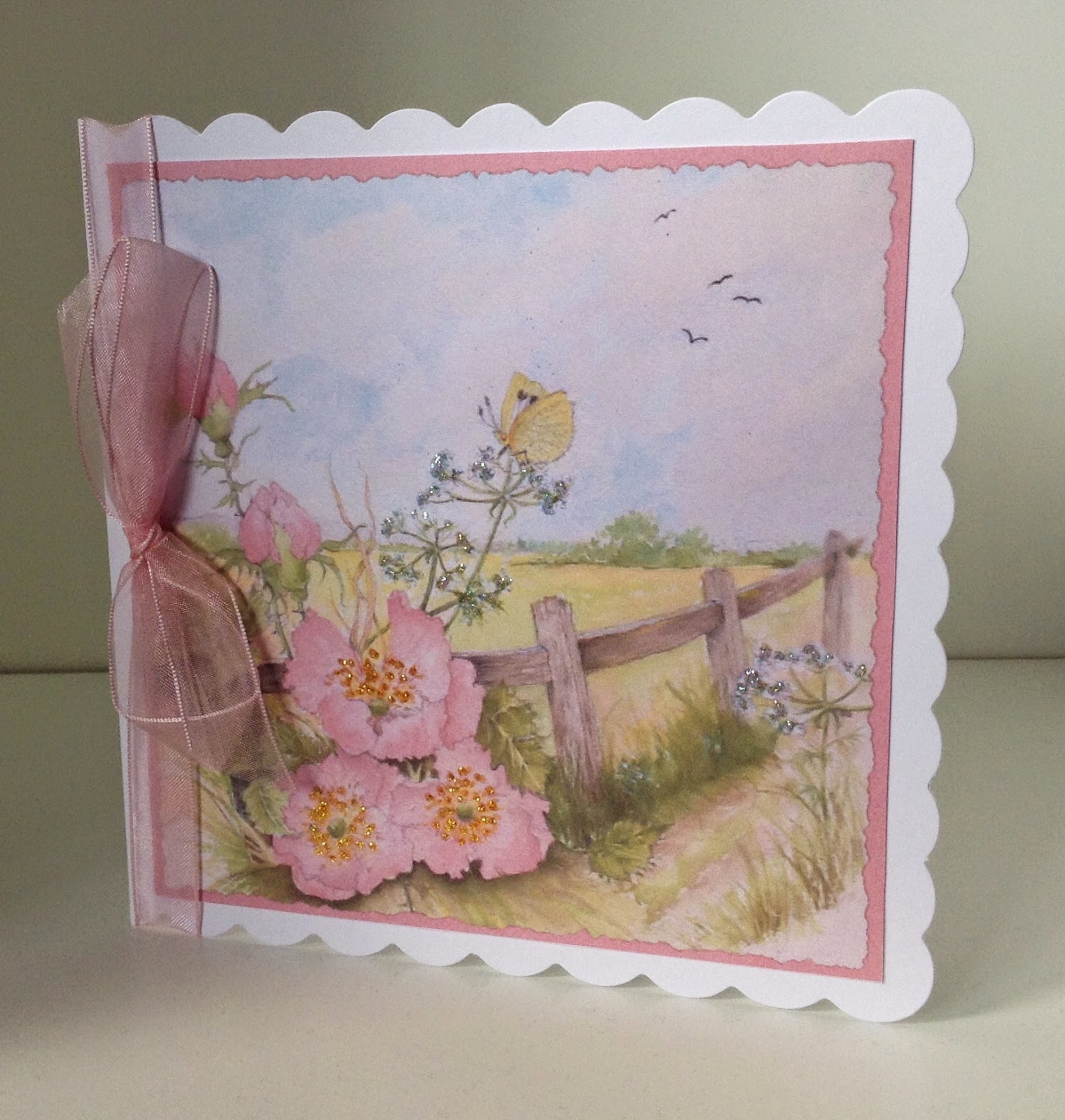 Another quick & simple card from me today (my favourite kind) and it is similar to a card I made ages ago but the main image is so detailed that I don't like to add too much too it.

I started by printing the image from my Walk in the Countryside cd-rom and decoupaging the flowers. I mounted it onto a piece of dusky pink card and then mounted that onto a 6x6 scalloped edge card blank. I added a pink organza bow to the spine of the card and a little bit of Stickles glitter glue to the centre of the flowers. Done!

I am entering this card into the following challenges:-
Crafting for All Seasons 'pastel hues' 30.3
In the Pink 'lots of layers' (decoupage) 1.4
Crafty Cardmakers 'spring' 5.4
Craft your Passion 'anything goes' 29.3
Digi Choosday 'lots of layers' (decoupage) 7.4
Paper Shelter 'blooming' 31.3
That Craft Place 'Easter/Spring' 11.4
Posted by craftyteacher (Vikki) at 9:44 PM 4 comments:

Websites I have used